DARLING YOU SHOULD FEEL LUCKY 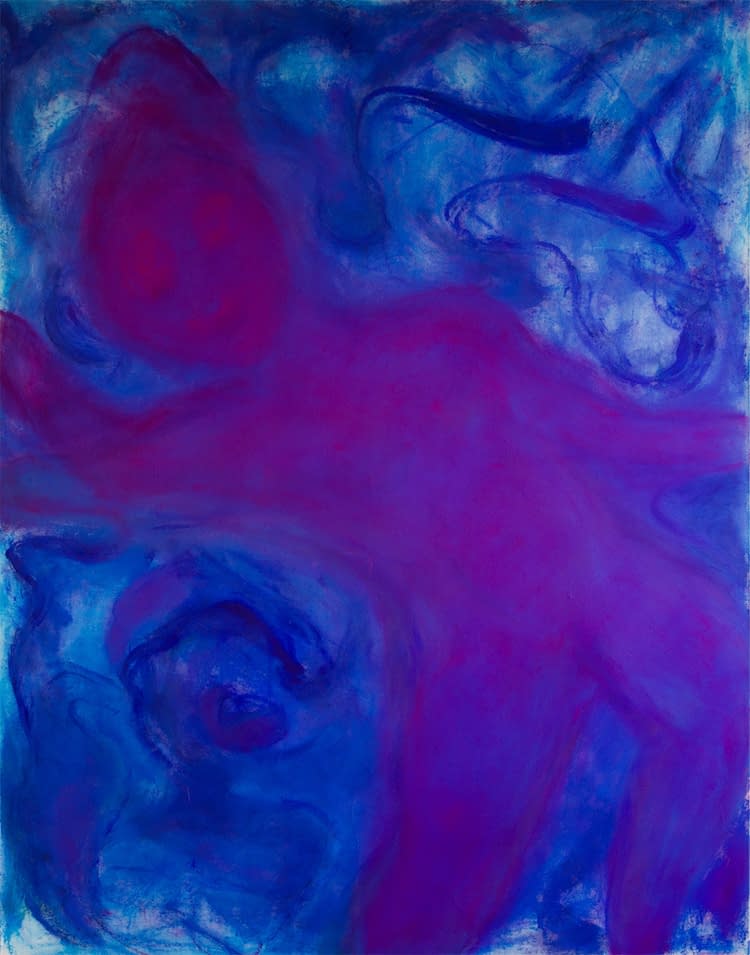 Christina Huber, it's a rare thing to become smooth, 2022

If the blue of the sky is the result of the interaction between the sunlight and the molecules and particles of the earth’s atmosphere, it depends as much on our situation and perception. The more the gaze gets away from the light source, the softer becomes the blue of the sky. The blue is the light that gets lost on its way to us, scattering in the atmosphere. In her Essay, Rebecca Solnit emphasizes and repeats: “the blue of distance.”[2] The color is only perceptible because unreachable. Therefore, the blue of longing.

The blue of Christina Huber’s painting is the blue of the in-between. The cobalt foundation applied on the primer is the first layer of color, although it might not be the first painting gesture. It is meant to be concealed and yet to seep through and confer this translucent bluish sheen to the ensemble.

On this aerial coating, the painted bodies tend to disappear as soon as they take form. “They are the bodies that never appeared and whose “not-appearing” ghost the canvas.” [3] Like remembrances would cease to be as soon as put down on paper, they vanish from the painter’s mind and recall a deeper and unconscious transmission. Christina Huber’s works are made in such a way as to defy the circumscribed corporeality and its social constructs, its systemic bias. The bodies are in constant movement and their pre-defined shapes tend to fade away to rather fill the canvas with ethereal flesh; the figures overflow, intertwine in transparency to let themselves be traversed by the layer’s porosity. Thus they permit us to receive more from the depths and see beyond individuation. “They touch, they fit, they leave, they forget.”[4]

The artist exactly explores the body motions and languages, the way bodies act and exchange within spatiality, in relation to the history of their representations and inherited power structures. Her interest lies in scrutinizing the postures, attitudes, gestures and contact-making based on her own research and empirical knowledge. But also, comprised in a participatory and collaborative methodology, she examines her subject through body oriented therapies, dance and choreography. The movements and  experiences are shared, integrated, lived, reminded and then transferred on the canvas with walnut oil. And eventually, melting in ultramarine.

So they dance these bodies. Together and within. They camouflage, they shapeshift, they smile; they expand in softness. How soft is the contact before the hit of the touch? A kind of softness that we would long for, like the delicate azure reflections of the faraway. Thus a softness far away from any gendered overtone and overrated opinion but rather lingering through the spectrum of possibilities. “Darling You Should Feel Lucky” is an ode to softness and the multiplicity of perspectives. The malleable beings guide us through the exhibition as to enhance its choreographic features. At the threshold of things, they inhabit desire, where we tend to.

Christina Huber lives and works in Berlin. In her artistic practice, snapshots of movement-based working are applied. Through painting, video and collaborative projects she explores bodily movements and languages, as well as the way bodies move in space, in relation to others in the present and to the history of their representations and inherited power structures. After a residency at Central Saint Martins (UAL) in London in 2018, she graduated as a master student of Valérie Favre in Fine Arts at the UdK Berlin. Her works have been shown at Lovaas Projects, Kunstquartier Bethanien, Museum im Bellpark, Kriens (online project), Kunst(zeug)haus Rapperswil, Tate Exchange – Tate Modern, among others. Her projects were nominated in 2021 for the President’s Prize of the UdK Berlin and the Elsa Neumann Scholarship (Nafög) and she received a scholarship from Neustart Kultur/ Stiftung Kunstfonds in 2022. Since 2021 she has been working in participatory projects together with the artist collective somebody*ies.

Johanna Ackva’s interest lies in the material, affective, political and aesthetic dimensions of the entanglements that make our world. In her work, exploring, sharing and reflecting concrete experience goes in tandem with the production of moving forms and images. Next to dance and other physical practices, conversations with experts, strangers and friends are an important working method for Johanna. Since 2014, her often collaboratively developed projects have touched on themes such as work and its value (The Agreement, AG Arbeit), experiences of natural deserts and loneliness (Salt Lake), constructions of femininity (EARTHBOUND SQUATTERS, Women and watery men), or finitude, death and our relationship to the dead (Solo ohne Titel, aus dem was sprachfähig war, CLOUDS ON CLEAR SKY, Grandmothers). Her current research circles around mysticism, voices, and historical figures of enlightened females. Johanna is co-founder of the Berlin-based dance collective Suddenly. Since 2020, she is part of a collective running Denk- und Produktionsort Libken (Uckermark).

Nina Wesemann was born and raised in Cologne where she grew up with one older brother. Between 2010 and 2019 she studied documentary filmmaking at the University of Film and Television in Munich while she also began working as a camera person. Since 2017 Nina is a student of dance and choreography at the HZT Berlin which is part of the University of Arts. She is particularly interested in the collaboration and fusion of art, technology and different film formats.

Emeka Ene is a performer born in London, raised in Berlin. He is lead guitarist and singer in the post-punk band Clear History and is currently undertaking a BA in Dance, Context and Choreography at HZT Berlin.

The exhibition “Darling You Should Feel Lucky” is kindly supported by Stiftung Kunstfonds and Neustart Kultur. We can also count on the great support of Berlin Distillery.